Description
Prize winning architecture combining glass and steel, with a stunning roof, where steel creates the symbolic picture “under the tree of knowledge”.

The library building interconnects the past and the future being situated on the site of the old St Olaf’s monastery from 1180. The ruins of the monastery are now part of the library, hosting events of literature, music and debates.

The architecture has a sustainable design – it makes a very adequate frame for also the future library. Library services change and it fits well into the 1992 building.

The Library fulfils its role as a local meeting point, connecting people, and also supports the local affiliation of the inhabitants giving direct access to the medieval history of the city centre. 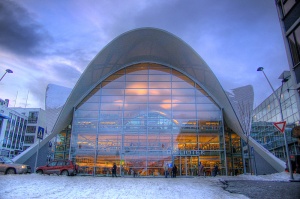 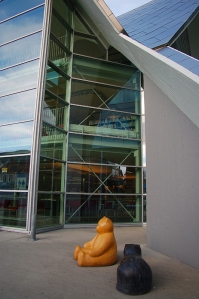 Description
Tromsø City Library and Archive was opened in 2005. It is 3500 m2 and was drawn by the Norwegian architect Kjell Beite . However the roof was the remains of a cinema built in the 1960.

The library is a part of a complex containing the Town Hall and a cinema. The library collection is housed on four floors and a top gallery and shares the building with the City Archives.

Because of its convenient situation and spectacular architecture, the library has become a natural meeting place for the local citizens, and a “must see” experience for tourists. The vision of the library is to be a model library in the region of northern Norway. In 2006 the library was declared the Best Service Enterprise in Tromsø, an award given on behalf of the citizens of Tromsø. In 2008 the library was nominated as one of three for the award of “Library of the Year” in Norway, while in 2009 a general poll voted the Tromsø Library the best public library of the year.

Name of the Library:  Drammensbiblioteket – The Combined Library of Drammen:

Description
The Vennesla Library and Culture House is a public library serving the inhabitants of Vennesla Municipality in Vest-Agder, Norway. The new library building completed in 2011 has won several architecture prizes and has been praised both within Norway[2] and abroad.[3]

The Municipality of Vennesla decided in 2005 to relocate the library to the city centre, linking together an existing community house and learning centre into a cultural centre. A café, open meeting places and a small scene were incorporated into the plan of the new building, making it a combined library and house of culture. With the new building, the municipality sought both to establish a public meeting place and to increase the quality of architecture in the urban area of Vennesla. An architectural design competition was initiated in 2008; it was won by the firm Helen & Hard from Stavanger, Norway and the new building was ready in 2011.

The main building material is wood, and the building is dominated by the 27 glue-laminated timber arcs that support the roof and give associations to ribs of a whale skeleton. The building has attracted much interest and won several prizes, among them Statens byggeskikkpris for 2012 (the Norwegian state prize for good buildings).[4] The building has, however, also received criticism for lacking functionality for its main purpose, namely being a library building. The author of an opinion piece in the Norwegian weekly Morgenbladet maintained that the library building was beautiful, yet inconvenient for normal library use.[5]

Photographs of the library are being spread around the world.
Huffington Post asked if this library is the most beautiful library in the world. ArchDaily writes that the library has a sophisticated elegance and Wallpaper describes the library as a library with strong identity.

In Norway there have been discussions about the library; “The winner of the Norwegian state prize for good building 2012 was the library in Vennesla. And it is a nice house. But is it a good library? All the shelfs, benches and the rest of the inventory is a part of the construction. A building where its usability seems to be of second importance and where its style hint more towards jewelry design than adapting to acquiring knowledge. Is it really aesthetics in itsself that is judged to be the greatest architecture of our time?”)

Description
Bergen Public Library is the second largest public library in Norway.
The library has Scandinavia’s oldest public music collection (1924), and has its own special collection of material by composer Edvard Grieg. The collection digital-based and is part of Norway document heritage register ( a national edition of the UNESCO World Memory Programme).

The latest project will be carried is a special section for young people with interiors designed by students of the Bergen School of Architecture in dialogue with the city’s youth. The library will also employ young people aged 16-19 to be designing activities in these premises in this department.